The Punjab and Haryana High Court is the common High Court for the Indian states of Punjab and Haryana and the Union Territory of Chandigarh based in Chandigarh. Located in the north of India, 365 meters above the sea-level, on the foot-hills of Shivalik range, is the city beautiful,’Chandigarh‘. It is the capital of two states of the Indian Union, namely, the Punjab and Haryana. Though it is the capital of two states, it belongs to none of them and is a Union Territory Before the partition of India, on August 15, 1947, the areas which are now parts of the Punjab, Haryana, Delhi, some parts of Himachal Pradesh and some areas falling in West Pakistan, formed Punjab. Lahore was its capital. 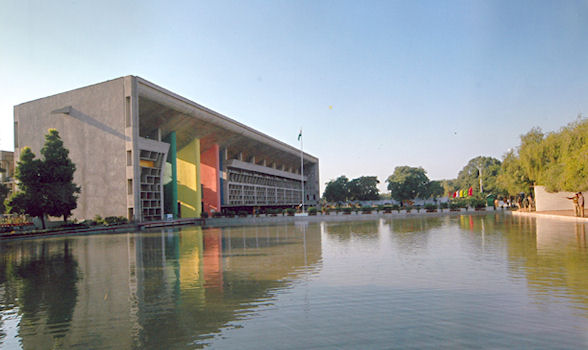 In the partition, Lahore was given to Pakistan. There arose the need to have a new capital for the areas of the Punjab that had fallen to India. In March 1948, the Government of Punjab in consultation with the Government of India approved a 114.59 sq.km. the tract of land at the foot of the Shivalik Hills in Ambala district, as the site for the new capital. Le Corbusier, a well-known, French architect, was chosen to execute the project. India’s first Prime Minister, Jawaharlal Nehru, enthusiastically supported the project and took a sustained interest in its execution. When he visited the project on April 2, 1952, he declared Let this be a new town symbolic of the freedom of India, unfettered by the traditions of the past, an expression of the nation’s faith in the future… The new capital of Punjab will be christened as Chandigarh – a name symbolic of the valiant spirit of the Punjabis. Chandigarh is rightly associated with the name of Goddess Chandi -Shakti, or power. Situated at a distance of about 240 kilometers on the north of Delhi on National Highway No.21, it is connected by bus, rail and air. Chandigarh is known all over the world for its being the first planned Asian city. The City is divided into well-planned and defined sectors. Each sector is a separate self-reliant unit, having all the essential amenities, such as school, dispensary, post office, market, etc. The City also boasts of open parks and wide roads. Being the capital of the two states, the administrative headquarters of both the States are also located here. Many people from other parts of India and the world visit it every day to see the architecture of its buildings. Zakir Rose Garden, Rock Garden, and Sukhna Lake are some of the places of interest in the city. It is also the seat of the High Court of the Punjab and Haryana. The High Court is located in Sector 1 of Chandigarh.

When it comes to the selection process, the candidates have to take up a written exam / Interview. Selected candidates will be paid a handsome salary (as per Govt rules). The type of questions that are asked in the technical interview round differs from one position to another. There are multiple steps for the selection process for the posts of Stenographer, Clerk, Peon, Process Server, Gardner, Chowkidar, Liftman, Sweeper, Watchman, Chauffeur, Cook, etc. in Punjab And Haryana High Court. The procedure is as follows

We advise to you for other Punjab And Haryana High Court Recruitment 2022 and selection process please read below official recruitment notification carefully before apply.

Know the current status of your case by Return SMS

Important: Case Number Record (CNR) is a unique Identity Number of each case, which remains constant. All the Advocates, Litigants, and stakeholders are requested to ascertain the CNR of their respective cases from the concerned Courts and to refer the same for all future references.